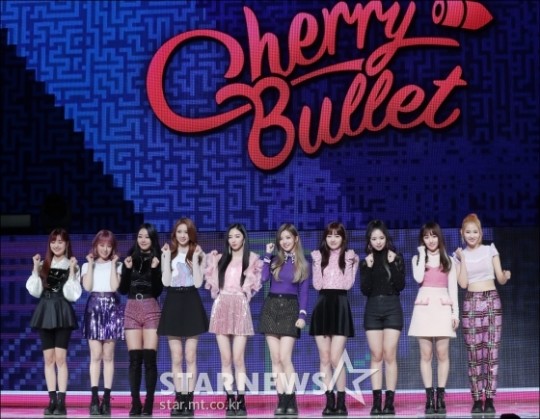 Girlgroup Cherry Bullet (Haeyoon, Yuju, Mirae, Bora, Jiwon, Kokoro, Remi, Chaerin, LinLin, & May) announced their goal is to win the rookie award this year!Cherry Bullet made the remarks at a showcase celebrating the release of their debut single "Let's Play Cherry Bullet," which was held at Yes24 Live Hall in Gwangjin-gu, Seoul."We made our debut today," said Cherry Bullet. "We want to deliver healthy and bright energy in the future. Our goal is to make our names known first because we are rookies.""Another goal this year is to win a rookie award.  And entering the Billboard charts," they said. "I heard that our dream is a big one.  As we were chosen as one of the most anticipated K-pop debuts in 2019, I want us to enter the charts with our music in the future."Cherry Bullet's team name is a word that combines the contrasting images of Cherry and Bullet, meaning that it is a girl group that will attack the public with its lovely yet energetic charm like a cherry. Cherry Bullet in particular, attracts people with its unique worldview. There is an operating system that has various game maps and quests. The members are given a new game map for each activity, and solve the quest by using their own robots and skill items. The title song "Q&A" is a bright and energetic song with a fresh upbeat sound and introduces addictive images of people wondering what questions they will be asked. In particular, the lyrics, "I hope you do well in the future," are full of Cherry Bullet's bold words to take the first step in the music industry, adding to the excitement. Meanwhile, Cherry Bullet's debut single "Let's Play Cherry Bullet" will be released on various online music sites at 6 p.m. on Monday.Source: [1]