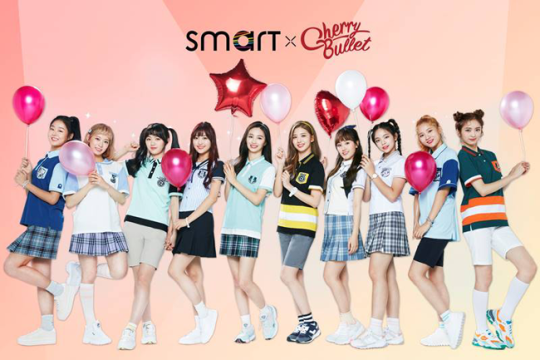 In 2019, Cherry Bullet (Haeyoon, Yuju, Mirae, Bora, Jiwon, Kokoro, Remi, Chaerin, LinLin, & May), who are considered a rising star in the music industry, made a splendid debut by being selected as models for a students' uniform line.Cherry Bullet was selected as the model for SMART students, a brand specializing in student uniforms. Cherry Bullet has finished shooting  for the uniform line and is planning to start active activities as an exclusive model of the brand by participating in various marketing and promotion programs. In particular, Cherry Bullet members Jiwon and Yuju have worked as models for SMART student wear since the second half of 2017 before their debut due to their potential. Cherry Bullet is a girl group that is the first girl group to be launched by FNC Entertainment in six years and has introduced their songs and title track's music videos of their debut single "Let's Play Cherry Bullet" through various music sites at 6:00 p.m. on the 21st. Cherry Bullet's unique team name is a combination of the contrasting images of Cherry and Bullet, meaning that it is a girl group that will target the public with its lovable and energetic charm like cherries. Cherry Bullet will perform in earnest with the title song "Q&A" and will perform with the charm of being lovable and energetic.Source: [1]