News Korea's Burning Sun Scandal: What You Need To Know

Keyts      Mar 14
|
11:37 PM
2
21
Keyts
On top of the snowballing sex bribery scandal involving former Big Bang member Seungri, a series of fresh allegations are appearing every day based on a set of leaked KakaoTalk chats that include him, singer Jung Joonyoung and more. They not only include messages joking about rape and sharing sex videos that were filmed by hidden cameras without consent of the women involved, but also gambling schemes and sex traffic conversations between participants of the chat.But with news being reported every day it may be easy to lose track, so let's shed some light on the reported controversies, scandals and the people involved in them in this overview! 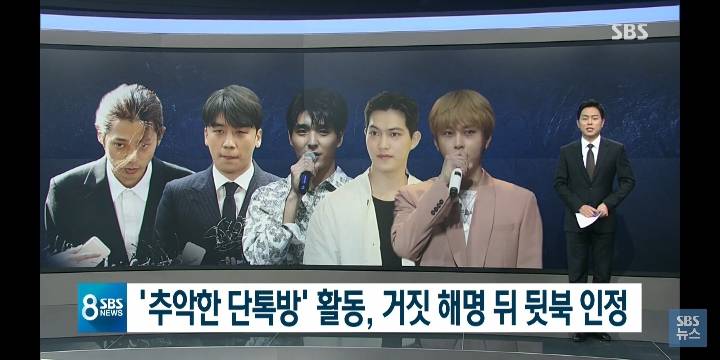 January 28th:It all began with a short video clip on Instagram uploaded by Kim Sangkyo, a 28-year-old South Korean man. He submitted footage for alleged violence that went on in November 2018 at the club "Burning Sun", where Seungri sat on the board of directors. Kim stated that the police treated him unfairly. He went public with his story and drew media attention, prompting investigations into the venue over drug use and sexual assault. February 26th:While the Burning Sun club scandal was in full swing, KakaoTalk messages obtained by local broadcaster SBS funE showed Seungri apparently procuring prostitution for VIP clients like businessmen and politicians.Speaking to other members of a group chat, he said to prepare ones that ‘put out easily,' while another member explicitly used the word “prostitute.” YG Entertainment swiftly denied the report in a statement on the same day in which they claimed the KakaoTalk messages were fabricated. The agency also threatened to “take strong legal action” against “fake news and rumors,” siding with the singer. Only two weeks later, the label would say it was “deeply sorry” for failing to properly manage its artist.March 11th:Seungri took to Instagram to announce he would retire from the entertainment industry. Two days later, YG Entertainment officially cut ties with him at his request.In a lengthy post, the singer said he had become “the enemy of the people” over the last month and a half and wanted to stop hurting others around him, like his company and his members, by retiring. Though he apologized and promised to cooperate with investigations, he did not confess to any charges. March 13th:In an emergency press conference, National Police Agency Chief Min Gapryong said police had discovered messages from a group chat room from 2015 that seemed to claim the chief of police was “looking after” the members of the room, and “not to worry.” Seungri and Jung Joonyoung were among those in the group chat.Min said police would investigate the corruption allegations at all costs. On the same day, it was revealed that FT Island's Choi Jonghoon got Yuri Holdings CEO, David Yoo, to bribe the police to cover up his DUI. There were evidences in the chatroom that they asked for police not to let the drunk-driving news from 3 years ago be leaked to the public. The member left the band afterwards and is cooperatively going through investigations now.CNBLUE's Lee Jonghyun was also found to be a part of it all as several of his messages in the group chat were released to the public showing that he sent illegally taken videos and also encouraged his friends to take those videos.March 14th:Seungri arrived at the Seoul Metropolitan Police Agency on Thursday afternoon to be questioned over allegations of sex bribery as well as his connection to scandals surrounding the Burning Sun club and possible police corruption.“I deeply apologize to the public and everyone around me who was hurt by me,” Seungri said with a solemn look to the press before he entered the building. Earlier in the day, singer Jung Joonyoung arrived back in Korea from an overseas filming schedule. He was to be questioned over charges of illegally filming sex videos without consent and sharing them in a group chat with over 200,000 messages.
Make Us Entertainment terminated their contract with him the day the news got out.Yuri Holdings CEO David Yoo was also supposed to be appear for the investigations, but his legal representative stated that his client said that "if you make me stand in a photo line (like JJY and Seungri) than I will not show up." Since he is considered an ordinary citizen and not a celebrity he has the right to have his face covered so as not to be exposed to the Korean Public. He arrived at the police station at a later time and news reports had to use pictures of Seungri instead to report on it. 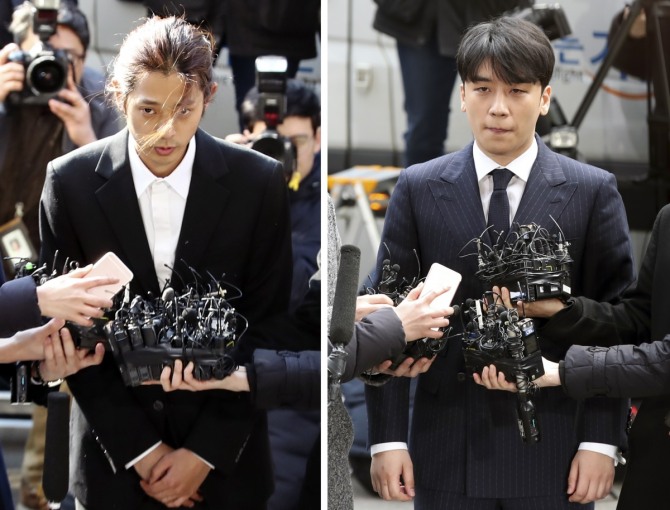 (pic credit: Yonhap News)Later that day, Yong Junhyung of boy band Highlight announced he was leaving his group after admitting he had viewed some of Jung's sex video clips in said group chat.March 15th:Seungri finished his police investigation after 16 hours, Jung Joonyoung after 21 hours. Both turned in their phones. The famous Aori Ramen Franchise has revealed to have cut ties with Seungri and Yuri Holdings.The broadcast of KBS News 9 included a report on David Yoo, who underwent police questioning for allegations of providing prostitute services for business investors. KBS shared recreated screenshots of a conversation between David Yoo and Jung Joonyoung from December 25th, 2015, where David Yoo confirms to send a prostitute to Jung Joonyoung as a present and Jung Joonyoung giving his adress to the other and asking if he should just send the prostitute back afterwards, which David Yoo confirms. There were also other recreated screenshots from a conversation on April 7th, 2016 between Jung Joonyoung and CNBLUE's Lee Jonghyun where the former says that he had met prostitutes in Berlin and had sex. He told Lee Jonghyun that the women there were good and explained that many were Romanian.KBS News stated that in addition to charges of the filming and sharing of illicit videos, Jung Joonyoung may also be investigated for prostitution. South Korea's law for criminal jurisdiction follows the nationality principle, meaning that its nationals can be prosecuted for crimes such as sex tourism committed abroad.March 16th:Choi Jonghoon arrived at the Seoul Metropolitan Police Agency for questioning at 10am KST. He is under investigation of allegedly spreading illegally taken photos and videos.Meanwhile, the Seoul Metropolitan Police Agency team investigating the allegations surrounding the "Chatroom" has confirmed that senior superintendent officer “A,” who is suspected of misusing his position to help cover up criminal activity, is an acquaintance of David Yoo, the now former CEO of Yuri Holdings who was also in the group chatroom. “A” made the admission during his questioning on March 15th.
On March 16th, the Seoul Metropolitan Police Agency stated, “The person in question has admitted to being acquaintances with Mr. Yoo. He admitted that they have gone golfing and eaten meals together.” News A also reported that Seungri is under suspicion of tax evasion. In 2016, Seungri founded the company BC Holdings with David Yoo, the CEO of Yuri Holdings at the time, after which they invested more than 30 billion won (approximately $26.5 million) in companies, including Korean fund management company Peregrine Investments.
They then purchased ready-mixed concrete companies, invested in Vietnamese corporations, and expanded their business. The National Tax Service focused on the origin of the 30 billion won (approximately $26.5 million) and began internal investigations as to how a new company like BC Holdings with capital of just 50,000 won (approximately $44) raised funds of over 30 billion won.March 18th:The Seoul Metropolitan Police Agency's Provincial Special Detective Division revealed that they summoned Jung Joon Young for a second round of questioning the night before and came to the conclusion of requesting a warrant to arrest him. However, the police do not have plans to issue a warrant for Seungri yet.Commissioner General Won Kyunghwan also stated in a press conference, “We have reassigned Senior Superintendent Yoon to another station, and as of yesterday, we have also taken the same measures for three employees affiliated with the Seoul Metropolitan Police Agency who are under suspicion of corrupt ties.” He added, “We will take severe measures against anyone connected to the suspicions of corruption, regardless of their rank.” The police are in the process of booking the three employees as well as Senior Superintendent Yoon. They will be charged with leaking official confidential information.Furthermore, he announced, "After the Burning Sun incident, we have booked 40 individuals [for drug-related charges]. Among them, we booked 14 Burning Sun employees and jailed three club MDs [merchandisers, also known as promoters]. There are 17 suspects involved in other clubs. We have also jailed the nine individuals who have not only used drugs, but also distributed them online. In CEO Lee's case, we will question him as a suspect for distribution and usage of drugs on March 19th at 10:30 a.m." 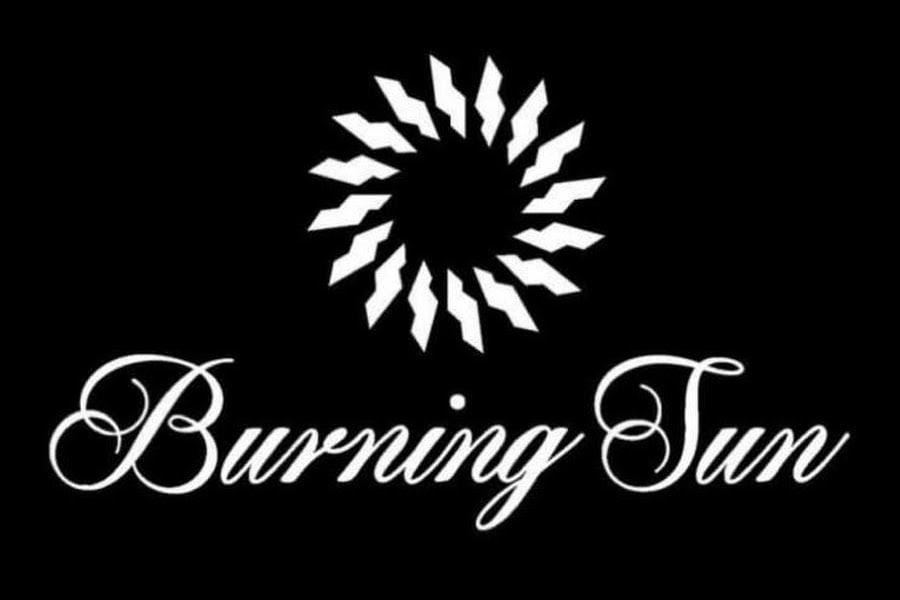 What charges could they face?Seungri is being investigated over charges of procuring prostitution after messages in 2015 allegedly showed him arranging sex for clients.Lawyer Lee Sueyeun, a communication director at the Korean Women Lawyers Association, says people who are caught arranging prostitution can face up to three years in jail or a fine of up to 30 million won ($26,400) in Korea.When it comes to another allegation that Seungri allegedly watched revenge porn shared by Jung in a group chat, she says it is “unlikely” he would face punishment.“It's difficult to prosecute someone for merely watching (spycam porn), unless the person made plans beforehand or encouraged uploading the videos, which could make them an accomplice, which seems unlikely (in this case).”As for the gambling, it is possible for Koreans to still get punished even when they do it outside the country. It depends on the situation, the amount of cash and the frequency of the gambling.In Jung Joonyoung's case, he may be sentenced to a maximum of 7 years and 6 months in prison.Kang Kyung-yoon, the SBS reporter who first raised allegations about the group chat last month, said the victims, mostly women in their early 20s, had no idea of the existence of the videos. “They (the victims) expressed shock and anger. But at the same time they feared to reveal themselves to take legal actions,” she said in an interview with SBS. “I receive hate emails from some fans who still support their stars. But I hope they understand this is a serious sex crime and there are victims.” Meanwhile, the Management team of Burning Sun and Arena Club are revealed to be preparing to open a new club that will be located in Gangnam, even when they're still under investigation. This overview will be updated as the investigation continues so stay tuned!