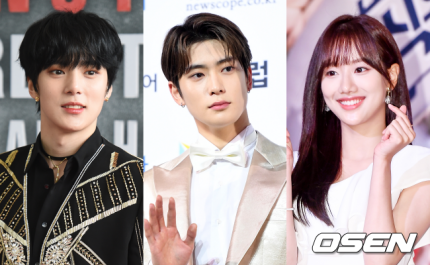 MONSTA X's Minhyuk, NCT's Jaehyun, and APRIL's Naeun become SBS "Inkigayo" MCs.According to a report by OSEN on October 2nd, MONSTA X's Minhyuk, NCT's Jaehyun, and APRIL's Naeun were selected as the new MCs of SBS "Inkigayo."Since all three possess artistic talents and a sense of entertainment that have been ironed out by a number of entertainment shows, they are expected to be received positively as the new faces of "Inkigayo."At the moment "Inkigayo" is co-hosted by SEVENTEEN's Mingyu and actress Shin Eunsoo. As the two are leaving, Minhyuk, Jaehyun, and Naeun will take over.Minhyuk previously presented as a special MC on SBS MTV's "The Show" as well as "Inkigayo." At the time, he made a splash and received positive reviews. Idol and actress Naeun, who has been active in many sides of the entertainment industry, also has experience as a special MC on KBS 2TV "Music Bank" and Mnet's "M Countdown."Jaehyun has proven to be a "progress idol." When he was a member of SM Rookies in 2015, he along with NCT's Doyoung were selected as the MCs of MBC Music's "Show Champion." At the time, he performed well as a rookie and proved to be a must-see MC.Mingyu and Shin Eunsoo will host until October 13th, which will then be followed by "Inkigayo Super Concert in Incheon" on October 20th. The new MCs - Minhyuk, Jaehyun, and Naeun - will join the show on October 27th.