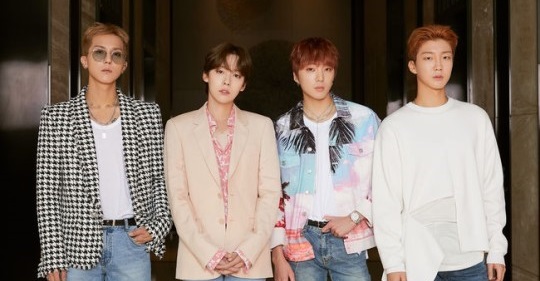 Pic source: OSENUpdate:WINNER (Kang Seungyoon, Kim Jinwoo, Lee Seunghoon, Song Minho) are in the middle of preparations for a new album.WINNER's agency YG Entertainment said on October 4th, "WINNER is preparing a new album and it will come out when the schedule is confirmed."Source: [1]Original article:WINNER is scheduled to release a new song in October.According to an OSEN report on October 4th, WINNER is in the middle of preparing a new album with the goal of releasing it this month.So far no exact date has been decided, but their are plans to release it before the concerts on the 26th and 27th of October. If WINNER makes a comeback in October, it will be about five months since their mini-album "WE" was released in May. WINNER has dominated the music scene with hits such as "REALLY REALLY," "LOVE ME LOVE ME," "EVERYDAY," "MILLIONS" and "AH YEAH." Also, Song Minho and Kim Jinwoo received lots of love for their solo albums.Thanks to this, WINNER is expected to heat up the music scene this fall with a new song in October.There is much attention and expectations related to the new release.Meanwhile, WINNER will hold "WINNER [CROSS] TOUR IN SEOUL" shows at the KSPO DOME in Seoul at 7 p.m. on October 26 and 4 p.m. on October 27.WINNER are also planning to tour the rest of Asia including the cities Taipei, Jakarta, Bangkok, Kuala Lumpur, Manila, and Singapore.Source: [1]