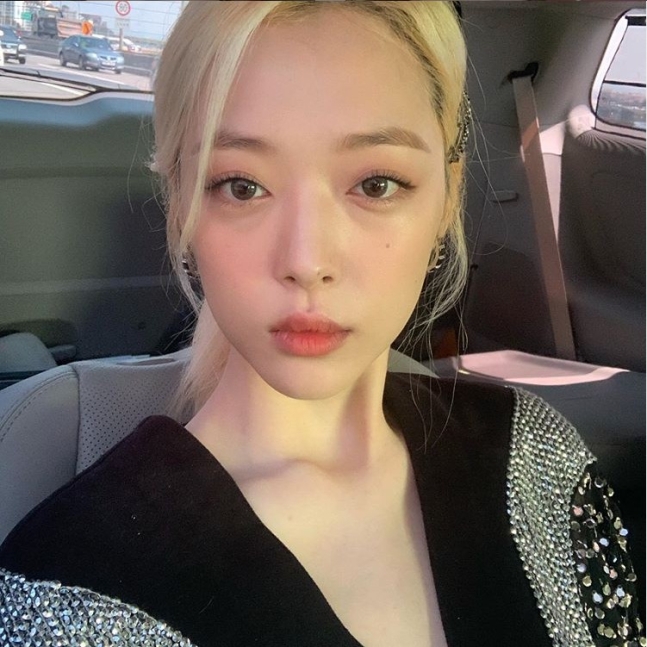 Singer and actress Sulli (25), who passed away on October 14th, reportedly continuously asked her agency SM Entertainment to take firm action against malicious commenters.An entertainment source told Busan Ilbo on October 15th in an interview, "Sulli was having a hard time with malicious comments. And she requested that her agency take firm action against them." Sulli sufficiently expressed her position to her company through her manager but SM Entertainment reacted passively.In fact, SM Entertainment declared a "war against the malicious comments" last year, saying that they are trying to eradicate them. However, this was just a "scaring" tactic to those who wrote malicious comments locally. According to the official, at the time, SM Entertainment said that it is difficult to find and punish criminals because the IPs of malicious commenters are registered overseas. The IP was created temporarily by netizens to post malicious comments, which makes it difficult to fundamentally respond to the issue.The official said, “If the company responded more aggressively at the time, or if the artist's condition had been improved, the situation would have been different."Suli had been actively communicating with fans through social networking services (SNS). The photos she released have always been the talk of the town online, and every time Sulli was harassed by malicious comments from netizens. She got malicious comments like "Are you crazy?" After being criticized for not wearing a bra in the uploaded photos, Sulli said she believed that "bra is just an unhealthy accessory." However, malicious comments criticizing her continued in the photo.Sulli continued to ask around for help. She asked her agency and netizens to "help" her, complaining of the pain she was suffering from malicious comments and rumors. But the situation did not change. In 2014, the company temporarily suspended her entertainment activities for about a year. Sulli last year admitted she was suffering from panic disorder in October on a show. In the latest episode of JTBC2 entertainment show "The Night of Hate Comments," she also expressed her gloomy feelings, saying, "In reality, Choi Jinri's innermost thoughts are dark, but she often has to pretend to be bright as an entertainer."

sato Hiroshi   4 months ago
Humerus how people are evil when an artist is alive and the moment she's gone everyone cares...why not always admire a artist opinions and choices in life.

To harass an artist is just plan jealously or stupid fandom wars. Immature people shouldn't make you feel depressed, your to feel rejoiced that your doing something right. Loser with no cause want to  cause trouble for you and your love ones , misery loves company .

4
4 months ago
sato Hiroshi   4 months ago
Need to be careful what your saying about any artist , they can all sue for cyber bullying. And these companies need thicker skin as well as the artist.
3
4 months ago
VendettaForV    sato Hiroshi   4 months ago
on one hand there are people actually physically deprived and suffering and she's a celebrity, with celebrity friends, health insurance and in the top 1% of phsyical specimens in the country... just plain gorgeous... i mean how many more things does this girl need going right in her life? everyone in the media just uses this suicide to further there own preconceived notions about what's "truly" wrong with kpop

3
4 months ago
huckleberry   4 months ago
This is surprising. I thought Sulli was like SM's precious princess that they protected all the time considering they never let go of her even if she left f(x). Poor Sulli never deserved this, or any other human being

3
4 months ago
IstanLegends   4 months ago
Wait so all that legal action was an act? What was SM thinking? That's it's going to be a placebo? They have to take legal action especially the ones which is definitely sexual harrasment. There was a clip of Irene's wardrobe malfunction that went around countless forums in Korea and disgusting creeps feasted on it for months!