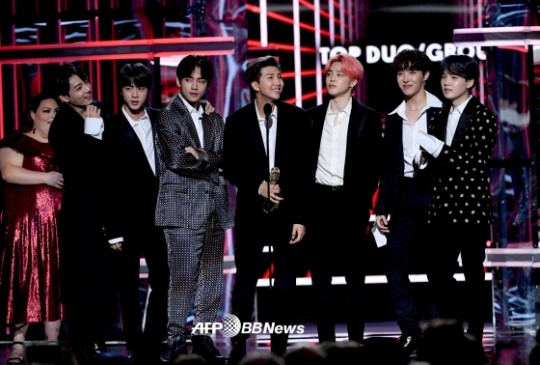 Ahn Minseok, chairman of the National Assembly's Culture, Sports and Tourism Committee and member of the main opposition Democratic Party of Korea (Minjoo Party of Korea), said one of the members of top idol group BTS (RM, Jin, Jimin, J-Hope, Suga, V, & Jungkook) seems to be enlisting in the military this year. In response, their agency refuted it, saying "It is not true."An official from BigHit Entertainment told Star News on October 21st that, "I don't know why such a story came up. It is not true that BTS will be joining the military this year.""I think one of the BTS members is going to the military this year, and I think it's been decided not to give special military service exemption to pop artists," Ahn Minseok said during a parliamentary inspection of the Culture, Sports and Tourism Ministry and its agencies.Rep. Ahn Minseok said, "Fine Art participants are given special military service exemption if they are at least second place in international competitions. This system was created in the 1970s, and until then, the realm of fine arts and pop culture art was clearly divided, but now it seems that it is not appropriate for the times to give military service privileges to fine art only and to not to give it to pop culture art because the walls of fine art and pop culture art are torn down.""There have been a lot of opinions even before BTS about granting special military service exemption to pop artists," Culture, Sports, & Tourism Minister Park Yangyoo said. "However, the Military Manpower Administration and the Ministry of National Defense want to reduce the number of special military service cases, but we (the Ministry of Culture, Sports, and Tourism) want to increase the number of people."Minister Park Yangyoo said, "There are clear international and domestic competitions on the sports and classical arts side, but it is not easy to set standards on the pop culture art side due to lack of such a thing. We have had discussions with the pop culture art community several times and we hold meetings frequently, and they said the most common problem is the difficulty of touring abroad without having served in the military. We are currently working with the Military Manpower Administration and the Ministy of National Defense to extend leniency regarding that," he explained."Many people would understand that the No. 1 ranking on the Billboard chart has contributed to the national prestige as much as the Olympic gold medal, but I asked them because I don't understand," Ahn Minseok said.

if bighit's decision is that I'll just support 'em

3
5 months ago
VendettaForV   5 months ago
It doesn't take a statistics major to see 2020 will be BTS's biggest year yet
1
5 months ago
Park Jimin5   5 months ago
I don't want them to get hurt
1
5 months ago
IstanLegends   5 months ago
Why are these Assemblymen so keen on pushing BTS for military service exception? The boys and bighit has already said that they will enlist and they have always kept their mouth shut. Honestly, something just feels so fishy about this. It seems like BTS are being used for someone else's personal interest.

1
5 months ago
huckleberry   5 months ago
BTS should just enlist together as a group so they could return as a full group earlier. TXT can keep the Armys fed while they're in the military.
1
5 months ago