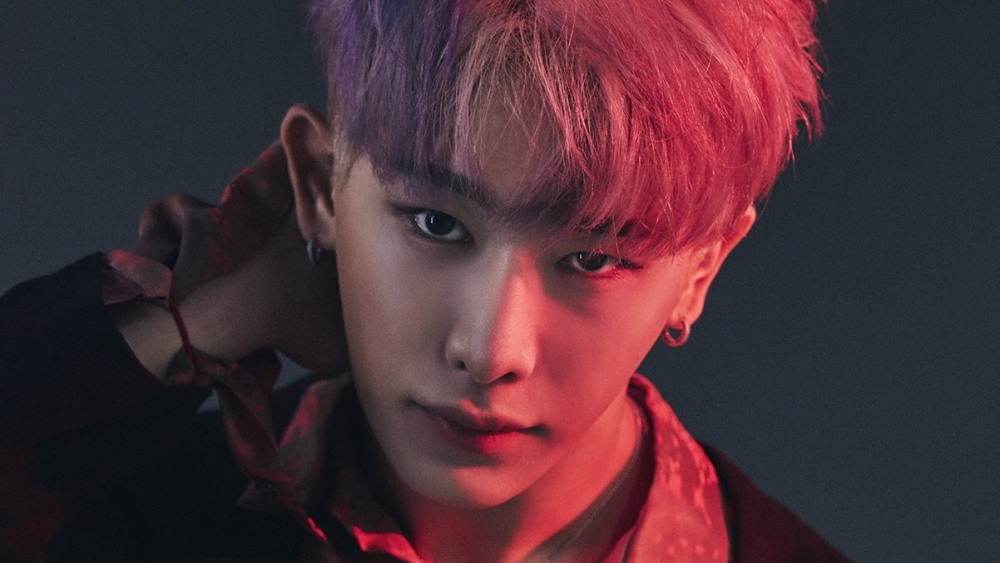 Update 2:Mnet's "M Countdown" is discussing whether to let MONSTA X's broadcast appearance air.On October 31st, a Mnet "M Countdown" official told Newsen that they are discussing whether to air MONSTA X's pre-recorded stage performance.Earlier in the day, "M Countdown" said MONSTA X will make a comeback by releasing the first stage of the title track "FOLLOW" from its new album, "FOLLOW: FIND YOU," and for the first time, "MIRROR," which was released to fans on the last world tour as a sub-unit song.The group MONSTA X also postponed its scheduled fan signing event due to member Wonho's departure.MONSTA X's management agency Starship Entertainment said on its official fan cafe on Oct. 31 that the fan signing event to mark the release of MONSTA X's mini album "FOLLOW: FIND YOU" was postponed, which was scheduled to run on Oct. 31."I will notify you of the changed schedule as soon as it is finalized. We sincerely apologize to the fans who waited for it," they added.This comes after MONSTA X's management agency Starship Entertainment said that after discussing with Wonho, he decided today to leave the group because of his opinion that he no longer wanted to harm the group. Wonho will no longer promote with MONSTA X from today. Starship Entertainment will however take legal action against malicious comments and rumors online.MONSTA X will continue as a six-membered group.Sources: [1], [2]Update:Wonho wrote a handwritten letter to his fans following the news of his departure from MONSTA X. Read it below:"This is Wonho"First, I want to apologize for not keeping the promise that I would only give good memories to our fans and for causing them pain. Additionally, I apologize for causing many people concern due to my personal issues."I have received undeserving blessings and love while promoting as a MONSTA X member. I sincerely thank you for making precious memories with me. To the members who worked hard and stayed with me, I would like to tell them that I'm thankful, I love them, and I show my apologetic heart."There was a time when I was immature and I have made big and small mistakes. After becoming a trainee and making my debut, I stayed on track and worked hard to avoid being ashamed of myself."I am announcing that I am leaving MONSTA X today."I am apologetic for causing harm to the members due to the unfortunate issues related to me. More than anything, I am sorry for disappointing my fans who believed in me. I have reached this decision after seeing many people having a hard time because of me."In addition to our members, I once again sincerely bow my head in apology to the fans who have believed in me and supported me."Please give strength to MONSTA X."The members have nothing to do with my issues."I carefully ask that you give support and encouragement to the members."The ate people who are too good to stop and get hurt like this because of someone like me."I am so thankful and apologetic to the staff, members, and our fans who have let me to enjoy such happiness until this point." 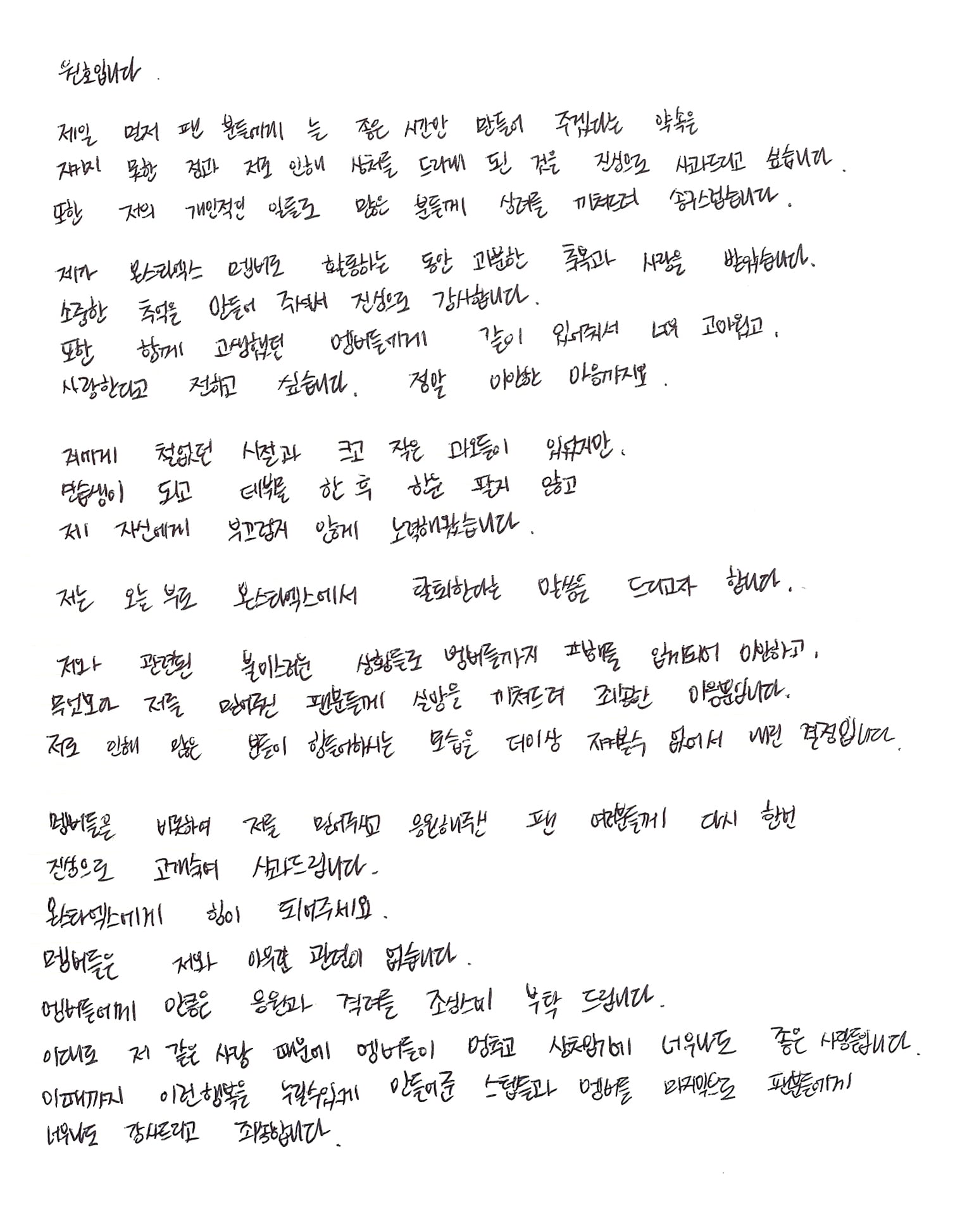 Original Article:Starship Entertainment have made an announcement regarding MONSTA X's Wonho's future.After Wonho's scandals for allegedly owing money to his ex-girlfriend Jung Daeun and for allegedly going to juvenile detention as a teen, his agency announced he will be parting ways with them.Read the full statement below: 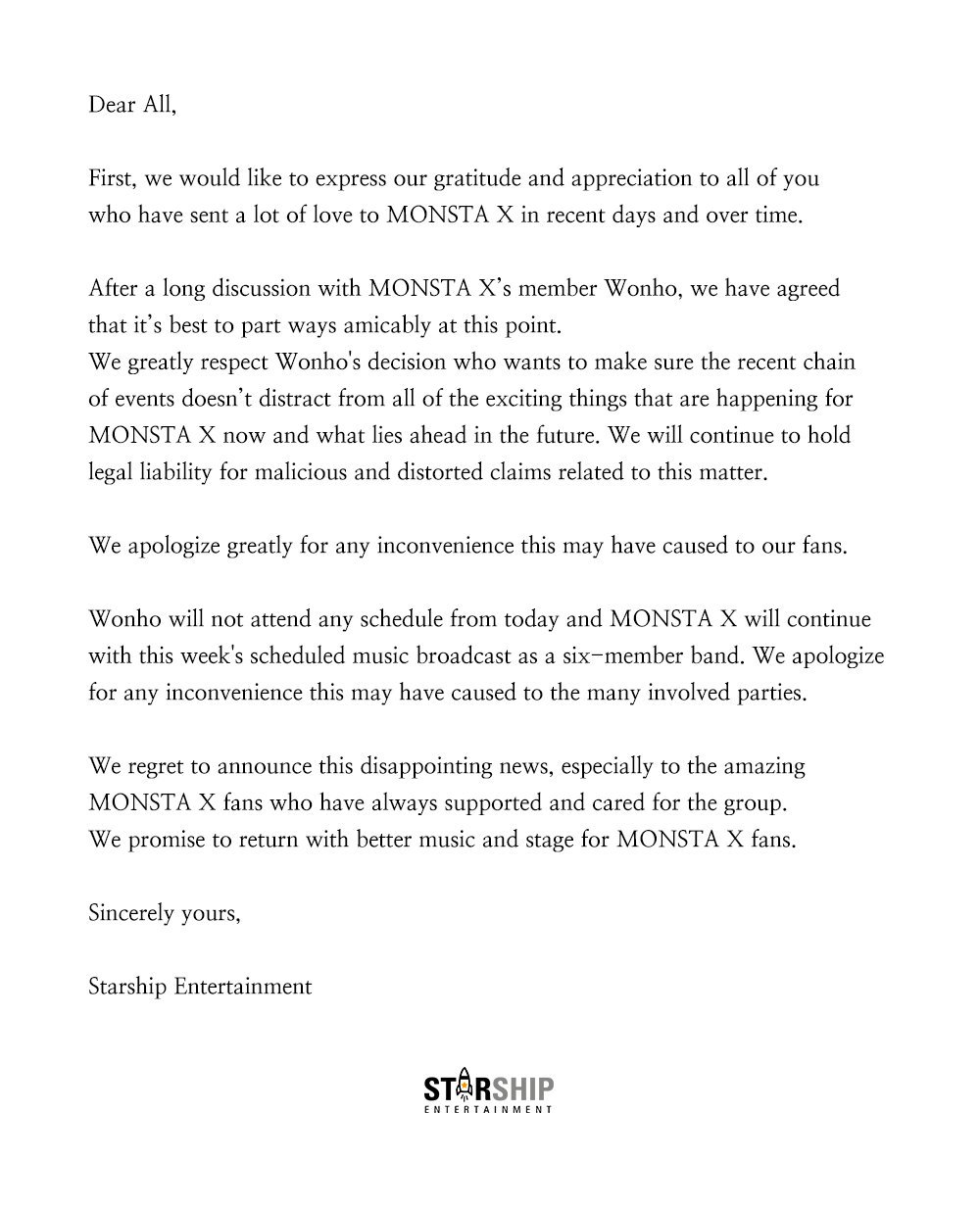 1
8 months ago
IstanLegends   8 months ago
Han Seohee might be a nuisance but she sure is scary. First B.I and now Wonho. Idols who got involved with her or her friends must be so nervous now.
3
8 months ago
DungeonKeeper   8 months ago
Does this mean everything that Han Seo Hee and Jung Da Eun said about him were true? Starship wouldn't just let him leave considering they are in the middle of their promos and their basically 2nd to BTS in terms of western progress.
2
8 months ago
katy laurent    DungeonKeeper   7 months ago
He is still with ss. Not with Monsta X but still with SS.

I don't want him to leave MX too.
2
8 months ago
Sarang   8 months ago
I can't believe this, this can't be happening, first it was woojin from stray kids and now wonho from monsta x this is not fair, my heart is broken

I will miss them a lot I will never forget them