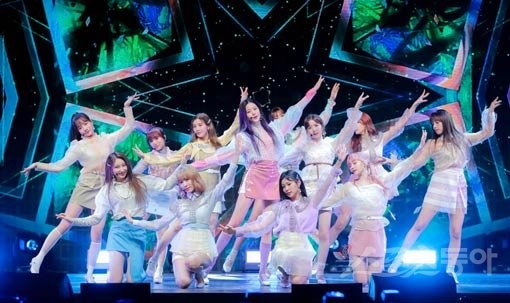 Cable channel Mnet will decide the future of X1 and IZONE, who are on the verge of disbandment due to controversy over vote rigging in the channels audition program “Produce 101.”CJ ENM, which owns Mnet, maintains its position that it will make a careful decision by respecting each group member's opinions as much as possible, but it is reported that the members and the agency officials are divided and are recently joining forces toward disbanding. Accordingly, they are expected to decide on their future moves and announce them soon.As PD Ahn Joonyoung and the CP Kim Yongbeom admitted to charges of rigging the vote, the move is aimed at ending the controversy over whether the two groups are active or not as soon as possible. Analysts also say that the reason for continuing the group's activities has disappeared as fans of X1, who insisted on keeping the team as the members are the biggest victims, are demanding their disbandment.In fact, fans demanded the group disband and terminate the contracts as soon as possible, saying, “We should not leave X1 unattended at a time when additional charges are revealed,” adding, “As time goes on, the members' dishonour and privacy violations are worsening.” They claimed that they should make an official apology to the members, fans, and all the victims and also make sufficient compensation for the damage to each member.According to this trend, CJ ENM is going to start its process to finish related matters after the Mnet Asian Music Awards (MAMA) that will be held in Nagoya Dome on December 4th. As he said earlier that he will take full responsibility, including compensation for damages, he is expected to offer an official apology and suggest ways to resolve the problem.In a related development, CJ ENM has yet to give an answer as of Tuesday on whether the original data of the viewer text voting results demanded by fans over the alleged manipulation of the “Produce” series will be disclosed. This is because if a member is found to have changed his ranking due to intervention by the production team, he could suffer secondary damage. “Because we cannot ignore many things, we will decide on releasing the original data after thinking more about it,” said a representative of CJ ENM on the 3rd of December.

huckleberry   1 month ago
we will decide on releasing the original data after thinking more about it,”Not sure if I understood this correctly, but there's an original list of actual winners?