Ref      Jan 13
|
12:53 PM
3
14
Ref
BIGBANG's Seungri had the Hong Kong leg of his "The Great Seungri" tour and fans were fuming at the mistreatment he had received from YG Entertainment as apparent during the show.Seungri performed with only two backup dancers, no live band, no stylist, and even revealed this was all the suggestion of Yang Hyunsuk himself.Fans are furious at this mistreatment, making the hashtag #SeungriDeservesBetter a trending one. 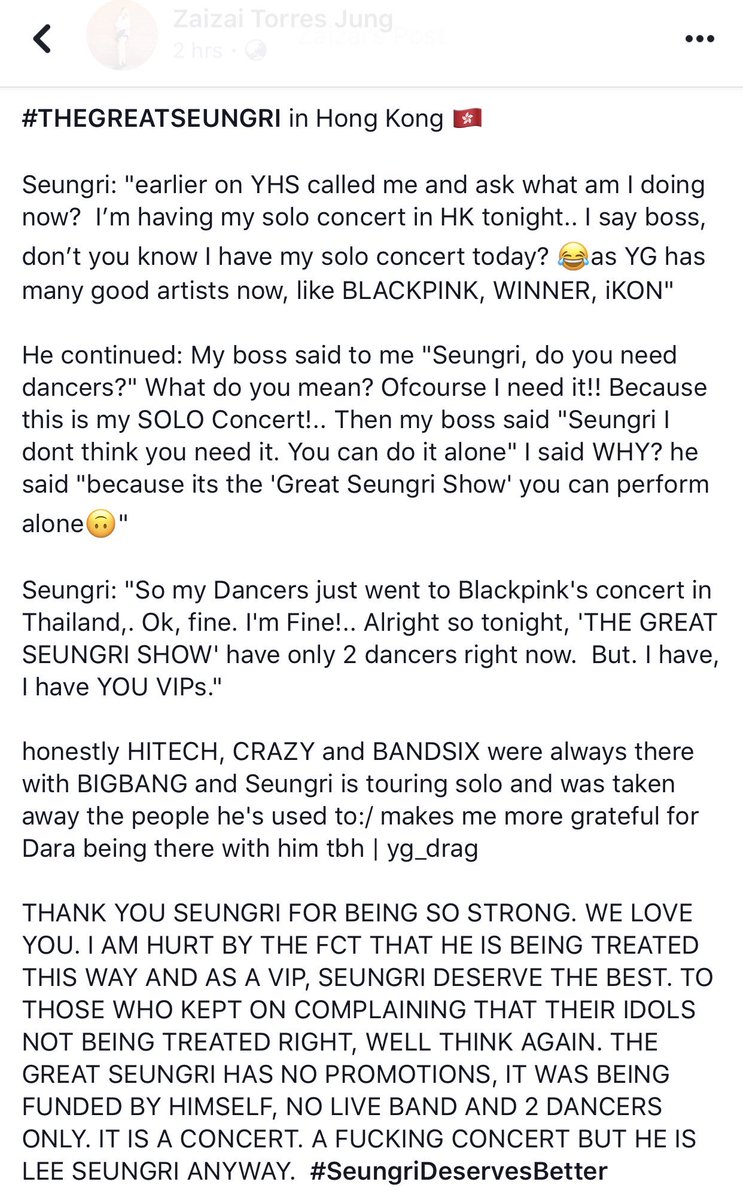 Please share this video as much as you can.... Seungri being frustrated over YG's mistreatment towards him. YG didn't even know Seungri is having a concert, then he just sent his dancers to the blackpink concert leaving just 2 dancers for him. WTF YG #SeungriDeservesBetter pic.twitter.com/4pQ1UoXfRi
— BIGBANG legacy (@VIP_Erixxi) January 12, 2019

BIGBANG's SEUNGRI: NoBand, NoStylist, 2Dancers, 2sets of clothes, prepped his own Setlist, NoPromo, Messed up ticket schedules2NE1's DARA: got her to perform 4 songs because she hasn't sung onstage for a LONG timeVeteran Artists Treated like beggars#SeungriDeservesBetter
—

-In School for JanuaRI-

UPDATE: But not only that, on January 16th, fans created another trending hashtag #YGTreatSeungriRight because even more information was unveiled about this case!

Imagine an artist from big company recorded his music in his own studios, sponsored his own comeback is paying for his tour his fans are promoting his concert and that big head yg is there being useless as usual #YGTreatSeungriRight— ♡¸.•* (@Magetory) January 16, 2019

Seungri was supposed to comeback in 2017, his last comeback was in 2013, but for some reason YG postponed it and so he had no other schedules apart from group schedules. Fast forward to August 2018 where Seungri finally got his comeback, yet the promotions only lasted for 2 weeks. The singer himself revealed that time, that his Comeback wasn't even in YG Ent's Schedule. Fast forward again to his concert tour: No promotions from the company! No official merch! His fans had to promote his concert tour with advertisements themselves, which they had to buy from their own money. What happened at his HongKong Concert can be read above and comments made by VIPs on Yang Hyunsuk's Official SNS about the situation get deleted!

YG only remembers Seungri when he wants to use him for his company. He used him to get some of his artists on shows, he used him and his DJ label for YGX after he proved himself to be a capable resourceful mind. The least you can do is support his tour. #YGTreatSeungriRight— ◦• ʙɪɢʙᴀɴɢ •◦ (@selva3bd) 16. Januar 2019

Krypta   1 year ago
This is so sad! And to think this happened to Seungri, a BIGBANG member, a legendary kpop idol veteran! So proud of Dara for being there with Seungri though. I can't wait for one them to build their own company and get away from YG.
2
1 year ago
DirtyAhjumma    Krypta   1 year ago
I don't think Seungri will leave though. I remember seeing a clip where he was talking about how indebted he feels to YHS. Sigh.
1
1 year ago
DirtyAhjumma   1 year ago
I feel bad for Seungri. YG has a knack for great music but also has an equal knack for treating some of his artists like sh*t. Sigh.
1
1 year ago