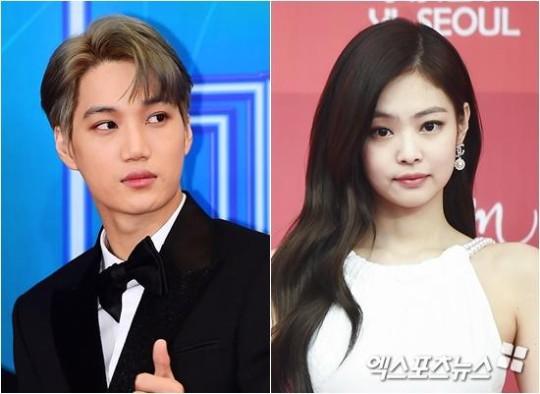 EXO Kai and BLACKPINK Jennie have split up according to SM Entertainment."Kai and Jenny have separated recently," Kai's management company SM Entertainment told XSports News on Friday. The date and reason of the breakup are unknown however. The two have returned to acquaintances 25 days after their relationship was made public.The relationship of an SM idol and YG idol was a hot topic. They were first spotted on a date as revealed by Dispatch on January 1st.Meanwhile, YG Entertainment cannot be reached for a statement as revealed by Hankoo Illbo. They are not picking up their calls.Sources: [1], [2]

EXO's Kai (24) and BLACKPINK's Jennie (22) have split up. Kai and Jenny have made headlines as a top idol couple. However, after only one month after their relationship was revealed, they have decided to take their own paths and split up."Kai and Jennie have decided to remain as senior and junior singers." said a close source to Kai on Friday to SBS FunE."It can be interpreted that they chose work over love. They have both decided to focus more on their respective projects and careers," another close source said. "It's like a choice for their groups, bandmates, and fans."The two plan to cheer each other on as singers. Kai and Jennie will do their best in their respective fields. They agreed to support each other like that.In other news, Kai is taking a break after completing his "Love Shot" activities. Meanwhile, Jennie will hold a world tour show in Hong Kong as part of BLACKPINK on the 26th.Source: [1]