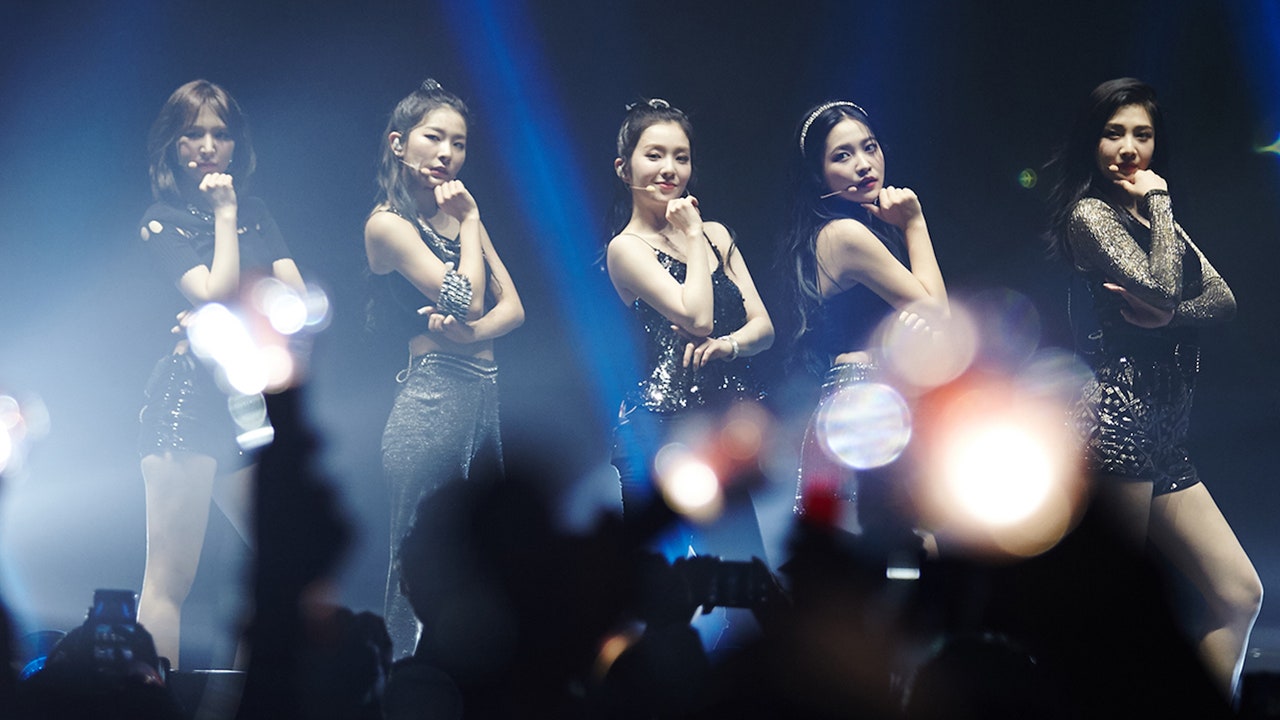 "That's never happened to me before," Seulgi shares onstage at the New Jersey Performing Arts Center in Newark. She's just asked a crowd of about 3,000 people if anyone noticed one of her hair extensions fell out while she performed "Rookie" with her fellow members of Red Velvet.Slowly but surely, a row of hair separated from Seulgi's half-up hairstyle, causing the K-pop group's leader, Irene, to laugh so hard she could hardly follow the song's trademark choreography. My friend Lai, who was sitting next to me, quickly realized what was happening and pointed out Seulgi tossing her hair extension aside.About two hours prior to Red Velvet taking the stage — and Seulgi's extension mishap — I joined the group backstage for a quick interview. No matter what we would start to discuss, the conversation just kept going back to hair. But let's be real, their hair wasthe true beauty highlight of the Redmare in USA Tour, the first time Red Velvet has ever toured in America. Girl groups have rarely done so, despite K-pop's skyrocketing popularity in the U.S., making this even more monumental.Malfunctions aside, the quintet constantly changed out their hair accessories along with their outfits throughout the show. (And the assortment changed for each stop on the tour.) Irene has given me a heads-up that this would happen. She adorned her high ponytail with ornate bows, bunny ears, and a tulle flower. Yeri, who is sitting in a chair beside her, points to the pastel bobby pins stacked on the left side of her middle-parted hair as her favorite look. At one point, Yeri switched them out for a diamond-studded headband. Wendy, on the other hand, topped her bob with a white tulle bow at one point. 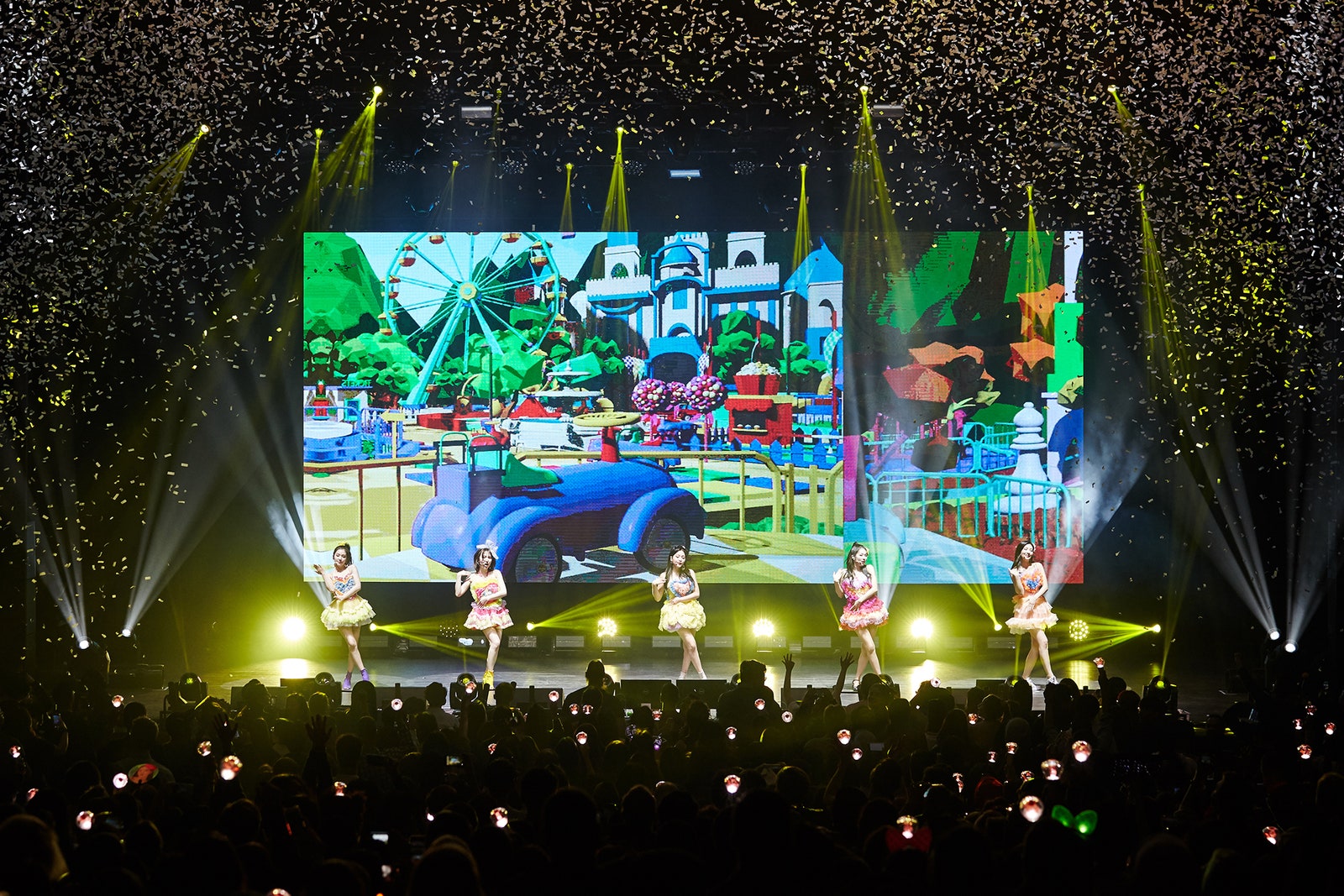 The Debut of Major HaircutsSince Red Velvet debuted in 2014, Wendy has had long, flowing hair with bangs in a range of hues, including turquoise, platinum, crimson, and amethyst. However, Seulgi points out that Wendy just cut her hair. Now, it sits at her shoulders in a coffee shade. "I think Wendy looks really great with short hair," Seulgi tells me. When paired with white outfits, like the feather-lined dress Wendy slipped on for songs like "Zoo" and "Mr. E," Seulgi says that the new style makes Wendy look even more charming and angelic.But Wendy isn't the only lady of Red Velvet with noticeably shorter hair. Yeri mentions that Joy recently got a haircut, too. At the moment, the ends of her hair hit just below her collarbones. It's not quite the edgy bob Joy told me she's dreaming of when I interviewed her back in December, though — I'm still holding out for that. During the same section of the concert where Wendy wears white, Joy has an adorable yellow, chick-inspired outfit on. "She looks even more [like] a chick rather than when her hair is long," Yeri says.

Red Velvet's Residents Beauty ExpertWith all this focus on their hair, I ask Red Velvet if, hypothetically, one of the members had to be the band's hairstylist for the day, who would be best for the job. Seulgi quickly calls out Wendy — an opinion seconded by the other members.Every group of friends has that one member they always ask to do their hair for a night out or big event. In mine, it's my sister Taylor. She wields a hair straightener to create curls like no other. In Red Velvet, the designation of hot-tool handler goes to Wendy. "Wendy knows how to do the best makeup and hair out of all of us," Seulgi says. "When it comes to using a curling wand, it's between Wendy and me. No one else really uses it."But Wendy's aptitude for beauty doesn't stop there: Seulgi also selects her to be Red Velvet's theoretical makeup artist because — wait for it — she grew up in Canada. According to Seulgi, Wendy learned about a variety of looks beyond the typical Korean makeup trends while living there. Plus, Seulgi says her makeup bag is filled with a lot of different products.Joy Skin-care RoutineAs for the member who is most fit to be Red Velvet's aesthetician, my guess is Joy. Yeri reveals that Joy packs the most skin-care products when they are on tour. "She always has many steps and a lot products that she implements into her skin-care routine," Yeri says. Joy goes on to detail every single step of her AM and PM regimens, starting with her morning routine.After washing her face, Joy reaches for the two toners she's been loving lately: one, a liquid she swipes on with a cotton pad, and another that foams. This is the first time I've ever heard of a foaming toner, and now, I need one as soon as possible. (Sadly, Joy doesn't share who makes it, but K-pop stars rarely tell me the brands they use due to endorsement deals.)
Joy follows up the toners with a moisturizing ampoule, a non-sticky moisturizer, and a barrier cream. "That's just my morning routine," she remarks earnestly, causing the other members to crack up. Ignoring them, Joy lists off her nighttime regimen while I give her my undivided attention.At night, she incorporates a sleeping mask, a spot treatment, and a moisturizing mask into the lineup. 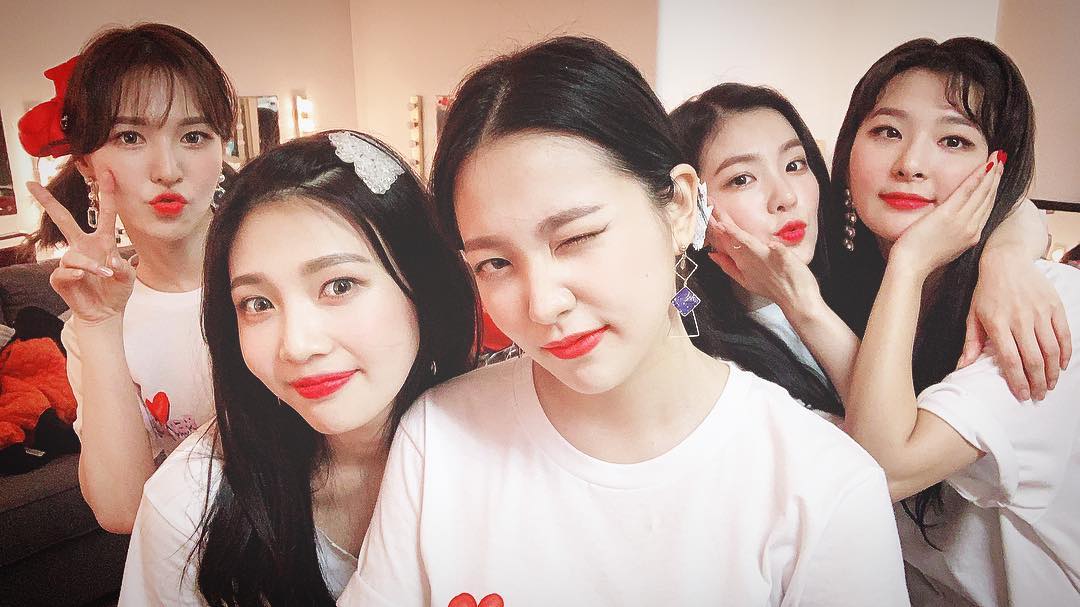 "When we are touring, we are moving from hotel to hotel, so when I get to the hotel, the first thing I do is put all my skin-care products out," she notes. And instead of trying out a variety of products from different lines, she prefers to stick to products from the same line because she believes they work better together that way. (In the past, Joy told me she's a fan of Etude House's Soonjung line.)Despite her passion for skin care, Joy acknowledges that going through the complexion-related steps of her routine can sometimes feel like a chore. "But when I'm actually doing it, I like it," she asserts. "You know when you don't want to get started? That's the hardest part."Seulgi, too, has to build up momentum. "I'm the type where I have to say, 'I'm going to do this,' and then, I get up and do it," she explains. However, she admits that her regimen is much simpler than Joy's, comprised of just toner and lotion. Red Velvet might be making history, but like everyone else, these K-pop stars still have to hype themselves up to do their skin-care routines, no matter how extensive or low-key they may be.@allure